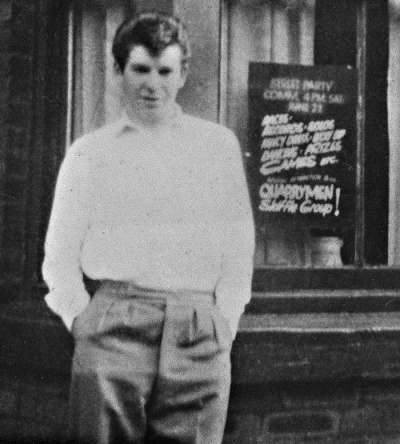 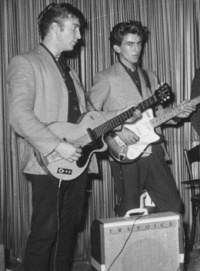 John playing his Hofner Club 40 guitar
When we reached town John asked if I would go with him to collect a new guitar from Frank Hessy's, a famous Liverpool guitar shop in Whitechapel. The guitar was a Hofner that John had been paying off for some time, and he was really excited at his purchase. Hessy's was one of the few shops that would take payments off equipment in those days.

Did you know any of the other Beatles? I used to have the occasional chat with Ringo in the Cavern, although it was always difficult to speak over the noise. At that time Ringo was with Rory Storm and the Hurricanes. The Cavern had one entrance and the acts would pass through the crowd to reach a small room to the left of the stage. Because of this it was easy to meet any of the acts and have a chat with them. I never met George, Pete Best or Stu Sutcliffe.