Although we always thought it was just John Lennon who wore the glasses in the Beatles, it turns out that McCartney occasionally needed glasses, as well.

This Daily Mail article includes the following, with this Frank Hermann photo during the Sgt. Pepper recording-session meeting:

This has become a hot topic due to the speculation that a picture of the Quarrymen's 22 June 1957 gig shows Lennon singing and a bespectacled McCartney in the audience looking on:

John Lennon performing with the Quarrymen 22 Jun 1957, as Paul checks out the scene...

If that guy in glasses and sports jacket isn't Paul, I'll eat my hat! In the photo below, compare Paul in the Quarrymen photo (at 15) and (inset) Paul at 19 or 20. The chin, the mouth, the ear, the whole thing. If it's not Paul, it's his doppelganger! 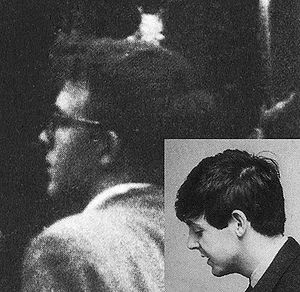 Here are some other pics of McCartney in glasses: