John Lennon performing with the Quarrymen 22 Jun 1957, as Paul checks out the scene...
In this photo of the Quarrymen's 22 June 1957 gig we see John Lennon singing and what appears to be Paul McCartney in the audience looking on, in either glasses or shades.

This photo of the Quarrymen (aka Quarry Men) has been around for ages. Amongst numerous other Beatles books, it is included in Mark Lewisohn's 1992 book The Complete Beatles Chronicle and the companion book to the Beatles Anthology documentary, The Beatles Anthology, published in 2000.

In the detail below, compare Paul in the Quarrymen photo (at 15) and (inset) Paul at 19 or 20. The chin, the nose, the mouth, the ear, the whole thing. If it's not Paul, it's his doppelganger!

Vote on it!
Vote on whether or not you think that guy is Paul on the PaulMcCartney Forum. (You'll have to register on the site to vote, but it's easy.) 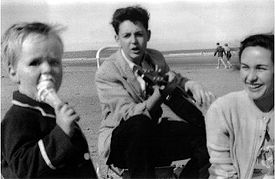 Compare Paul's jacket in this photo, taken in 1957 in Filey, with the one the guy in the Rosebery Street photo is wearing! Filey is a seaside resort about 140 miles NW of Liverpool.
"We were sitting round a table having coffee when Ivan and Paul came in. McCartney wa wearing a white jacket and black drainpipes" —Len Garry, bassist with the Quarrymen

"Paul's main reason for going to the Woolton féte was not to meet John Lennon but to try to pick up a girl. To this end he wore an outfit loosely modelled on the popular hit 'A White Sports Coat and a Pink Carnation', then regarded as the height of teen fashion. His white sports jacket had metallic threads which made the fabric sparkle." — Barry Miles, Many Years From Now, p.27

Is this the jacket? And, hey, the white shirt? Sure looks like it...

A bespectacled Paul McCartney is clearly present at the Quarrymen's June 22, 1957 gig on Rosebery Street.